Dylan Cooper is the President and a Life Member of the Waverley Little Athletics Centre Inc., and the President of the Southern Metro Region. He has been involved at the Centre for 20 years; an athlete for 7 years, a volunteer for 14 years and Committee Member for 11 years.

Life as an Athlete
Dylan was an exceptional sprinting athlete during his time at Waverley. He spent several years perfecting his sprinting technique under the careful guidance of Lynda Crane, Terry McGrath and Brian Harrington. Dylan broke and still holds several records at Waverley, participated in numerous Open Days, won several Region and State Championships in the relays, coached by Steven Lopes, and won three individual State Championship medals in sprinting.

Waverley Little Athletics Centre Inc.
During the 2007/08 season, Dylan "burnt out" after 6 straight years of sprinting, training, school athletics, senior athletics and cross country. He started volunteering in a General Official capacity while not participating in his weekly events. This led Dylan (and Estelle Lopes) to volunteer at the 2008 Australian Little Athletics Championships held at Bill Seward Reserve.

Dylan officially began volunteering at the start of the 2008/09 season, catching the 7am bus from Springvale to Glen Waverley every weekend. He took over as Discus 1 Manager, Turbo Javelin Manager, joined the Early Set Up Crew and trained as a Starter. He also completed all coaching and officiating courses available - soon becoming the highest qualified official at Waverley, which was put to very good use. Dylan also volunteered at Region and State Championships, filling in Waverley's General Official duties, reducing the amount of time that parents needed to spend filling these roles. In recognition of his services during the 2008/09 season, Dylan was nominated for VLAA Volunteer of the Year.

At 16 years of age, Dylan was very enthusiastic and joined the 2009/10 Committee as Equipment Manager, a position he held for two years. He became the youngest Committee Member in our history and was responsible for managing the storage and maintenance of the Centres assets. Dylan also completed the On Track course, began assisting/hosting school bookings, continued with early set up and starting. When Waverley's track was re-seeded by the Monash Council during the 2010/11 season, Waverley was very lucky to participate with Springvale LAC at Ross Reserve in Noble Park. This was a very challenging experience that proved to be very successful. Dylan assisted with early set up and starting while other Committee Members transported and housed the Waverley equipment to and from each weekend.

After thee excellent years as Arena Manager, Glenn De Lisen resigned, so Dylan decided to learn the ropes during the final weeks of March 2011 and took over as Arena Manager for the 2011/12 season. Between Dylan and Lindsay Harrison, lots of changes were made. Dylan was responsible for; making changes to our weekly programs to even out the number of events and suit our membership numbers, managing the program without the use of Lane One, organising and monitoring Key Officials and General Officials duties, keeping a weekly record of parent duties to ensure they were complying with their duty requirement, Line Marking the track, helping maintain equipment, early set up, announcing and starting. Dylan was also responsible for purchasing; line marking paint, new high-vis vests for Key Officials, new blue bibs for general officials, new two-way radios and other minor pieces of equipment.

In 2012, at 19 years of age, Dylan was elected as the youngest President in the History of the Centre and Little Athletics Victoria. His Presidency was from 31st March 2012 until 22nd July 2015, when he resigned due to work commitments and living in Benalla, Victoria.

In 2015/16, Dylan was awarded Life Membership at the Waverley Little Athletics Centre Inc., in recognition of his exemplary service to the Centre. He is/was the youngest recipient of this award in the Centre's history, at 23 years of age.

In August 2016, Dylan moved back to Melbourne and re-joined the Committee as the Region Delegate.

John Hatt*, Dylan’s grandfather, volunteered his time at Waverley when Dylan was an athlete and during Dylan’s time as Equipment Manager and President. He and his wife Eileen were heavily involved in Little Athletics from 1968 until 1978 at the Springvale Little Athletics Centre. Both were Founding Members of the St. Anthony’s Little Athletics Club and were awarded the first Club Life Memberships in 1977 along with some of their life long friends 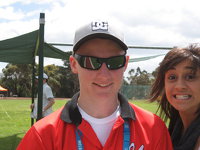