Awarded to a Southern Star (U13-U16) at the Committee's discretion to recognise good sportsmanship, polite and helpful attitude, good relationship with peers and leaders/officials, high level of attendance and enjoyment of Little Athletics.

Aaron John Linskens was born on 17/12/1983. He started Little Athletics at the age of 5 and he loved it. He continued in Little A's until he was 15. Aaron won many races and lost just as many along his Little Athletics journey, but all of it done with a smile on his face because he loved to compete. When Aaron was in the Under 16s he began to mentor a group. All under 16s were invited to do so. At that stage the under 8s were our target team as there was always a bit of argiebargie amongst the children before each event. Aaron decided he could mentor this group and quieten them down, despite us telling him adults were having a bit of a time with them... After three weeks he got an idea and requested a whistle. That little group became the best behaved of all! It caused many a laugh with parents to see their children almost marching to each event so that they wouldn't get the whistle blown on them.

Most of all, Aaron loved to compete. To him it wasn't important to win or lose, it was important to be a participant. One of the best moments of my life was watching him run the second leg of the 4x100 relay at State Championships. The team won a silver medal which hung in a pride of place in his bedroom. Unfortunately, Aaron passed away on the 3rd of June 2002. In his memory we decided to donate a perpetual trophy and shield to Waverley.

The Aaron Linskens Memorial Shield is awarded by the Committee to the athlete that exhibits the same qualities as Aaron: good sportsmanship, polite and helpful attitude, good relationship with peers and leaders/officials, a high level of attendance and enjoyment of Little Athletics. 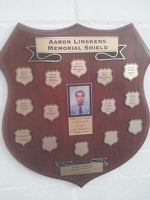