Lloyd Nichols is a Life Member and Past Committee Member of the Waverley Little Athletics Centre Inc. He was from the Glen Heights Club and is the second longest volunteer in the history of our Centre, volunteering for 35 years.

Lloyd’s involvement commenced in 1978 when his two children joined Little Athletics. In 1979, he joined the Centre Committee and served as Club Delegate for 5 years. Lloyd also took up Walk Judging and he continued to coach and judge Walk Races for over 30 years.

Unfortunately in 1994, Lloyd suffered from a severe stroke. But that didn’t stop him or slow him down. Lloyd bounced back and resumed Walk Judging and coaching at Waverley and Nunawading in 1996.

Throughout his Little Athletics career, Lloyd volunteered at SMR Championships, State Championships, AV meets and other regular Race Walking Meets. He has also coached several athletes to success over a long period of time.

For his outstanding and long standing service to the Waverley Little Athletics Centre Inc., Lloyd was awarded Life Membership in 2006/07.

Lloyd continues to train himself and coach several athletes at Central Reserve on a weekly basis.

Lloyd has had a long standing association with the Victorian Race Walking Club were he was honoured with Life Membership in 2009.
Below is a statement from their website.

Lloyd Nichols has been a member of the Victorian Race Walking Club for over 30 years but his career in athletics goes back much further than that.

Now aged 68, Lloyd took up athletics aged 16, in 1957, competing initially with Geelong Guild as a sprinter and middle distance runner. After a few years, he swapped clubs to Dandenong and saw out his competitive career with that club. Dandenong eventually became Springvale which became Waverley Athletics Club and he only missed 2 days of summer competition in 20 years. He also served as secretary of the club for some years.

He was made a Life Member of Waverley Little Athletics in 2007 for his contributions as judge and coach there over many years.

From ages 16 to 25, he concentrated on running, specialising in the 880 yards. His best time stood at 1:59 but he found that his performance leveled out in his mid twenties and, whether he ran from the front, the back or mid field, he could not improve his best time any further. Consequently, he swapped to racewalking at the age of 25 and spent the next 10 years competing in our wonderful sport. In that context, his name can be seen in the results for various Victorian championship walks in the late 1960s.

I don't think many people, especially sprinters, did long distance training in the early '60s, but Lloyd frequently ran home from work in the city all the way to Dandenong. Athletics has been a way of life to him.

He took up judging some 30 years ago when involved in Little Athletics and has been a regular at the Victorian Race Walking Club ever since. His son and daughter were both very good racewalkers.

He has had a walking group every Monday morning at Jells Park for many years and has coached walkers like Jean Knox, Brenda Riley, Shirley Coppock and Janet Holmes at different times.

It was some 16 years ago now that Lloyd suffered a major stroke but, to his credit, he fought back and resumed his judging and coaching activities as soon as possible. Even now, he runs in 2 or 3 races at East Burwood Masters each week and has done for over 20 years, both before and after his stroke.

It is fair to say that he has been, for many years, one of our most committed VRWC judges, doing just about all club races and regularly putting up his hand for any and all Victorian championships. He also judges every summer in the AV Shield competition and has also judged at Masters Nationals and Oceania Games.

The final word from Janet Holmes whom Lloyd has coached for the past 10 years:

As a coach he never shouts or carries on but lets it be known that training has to be taken seriously. He is very patient and always finds something positive and encouraging even after a disappointing race or training times. 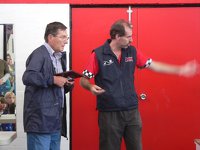